Optimising people, technology and their environment

“Don’t be too proud of this technological terror you’ve constructed. The ability to destroy a planet is insignificant next to the power of Human Factors methods” (Darth Walker, 2015)

One of our close collaborators, Dr Guy Walker, is using Star Wars in conjunction with our Human Factors methods textbook to teach engineering undergraduates about assessing resilience in complex systems.

Guy compared a HAZOP style method with Cognitive Work Analysis when used to assess the resilience of a highly complex sociotechnical system – the Death Star. 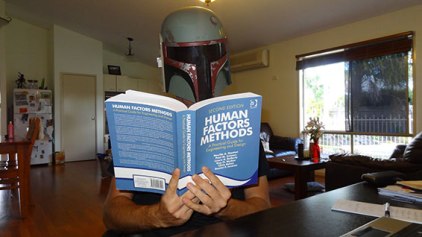 In the film you will remember that the rebellion destroyed the Death Star when Luke scored a direct hit on the thermal exhaust port with his X-Wing’s proton torpedoes. Guy used both Human Factors methods to identify additional vulnerabilities that the rebellion could also have exploited, potentially creating a new ending for the movie.

It seems that the Death Star had a number of vulnerabilities. Guy and his Padawan learners identified a range of other avenues for destroying the death star, including the use of a computer virus or an infestation of space vermin. A key finding from the work was that the older and reductionist HAZOP-based approach was not as useful as the more modern sociotechnical systems thinking-based Cognitive Work Analysis. Systems analysis, it seems, could also have brought balance to the force. Had the Rebellion had access to Cognitive Work Analysis, it could all have ended very differently!

May the force be with you Guy!